Why go to Mass? 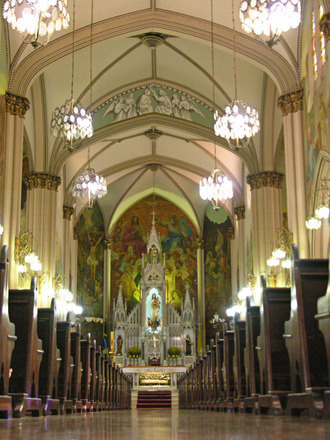 Getting up for church on a Sunday morning is hard.  Often I would way rather be sleeping than trying to be ready in less than an hour and cheerful at church when I’m still trying to get over my morning drowsiness.  Plus talk about trying to get a big family out the door.  Let’s just say it’s not always butterflies and rainbows.  So if church is such a hassle why even go?  I mean what’s the point if the homilies are boring and the music is terrible?  Let’s pause for a moment and I’ll tell you a story about a saint and a mule.

In the region of Tolosa, Spain, Saint Anthony of Padua was trying to convince a heretic to become Catholic.  But after no success, the heretic said if Anthony could preform a miracle with the Eucharist he would convert.  The saint agreed and after three days of prayer and fasting he arrived back at the heretic’s house.  When St. Anthony arrived with the Eucharist, the heretic came out with a mule he had been starving the past three days.  But when it was shown food it instead went to the Holy Eucharist in St. Anthony’s hands and bowed before it, therefore converting the heretic.  Wow!!  How can a beast know to bow down before the Eucharist?  Is there something I’m missing?  Maybe there is actually a bigger picture at Mass I haven’t seen before.  But what?

When I went to Mass last week Father gave me the answer.  There is a bigger picture and it’s happening right there on the altar.  God is preforming the GREATEST miracle of all right there on the altar ever Sunday.  And how many times have I missed it?  Yes, I might have seen Father raise the host, but did I truly see it with my heart and soul, become Jesus’ body and blood?  If it’s truly all that, why am I not jumping out of bed with joy every Sunday morning?  We are always so excited to see a famous celebrity or our favorite pop star, but what about God?  Every Sunday we are seeing God.  Just stop for a moment and reread that sentence.  Think about it.  Let it sink in…  Every Sunday we aren’t only seeing Him, but receiving Him too!  Wow!!  This is so great my mind can’t even comprehend it which I think is why it is so easily forgotten.

Okay.  So Mass isn’t about the homily or the music, but about the altar miracle.  The greatest miracle.  And it is done for you and I.  So next time Sunday rolls along will I get out of bed?

My name's Monica and I love my Catholic faith and writing! So I decided to start a blog called https://desiringheaven.com to encourage and help others like you to someday become a saint! I'd be overjoyed if you came over and joined me in striving for Heaven by subscribing. Or just come say hello and tell me how your heavenly journey is going! I'd love to hear from you!!

I am so glad you took the time to come check out my blog! I hope you like it and leave a better person, smarter in the faith, or encouraged to stay strong and have joy! I'd love if you continue to stay connected by subscribing! Let's work together to reach Heaven by living life to the full with joy and love for Christ!